The stay at home mandate and self-quaranting is vaguely familiar, reminds me a little of our extended evacuation in Houston following Hurricane Katrina, which is why I think we aren't panicking. For about a month an a half (it felt longer!), we had no where to go, very little work so no real schedule. Every morning we would go for a walk around the neighborhood. That got us up and out for the day. But we weren't at home like we are now. I have so many chores on my "to do" list so I am trying not to waste this down time, but it is hard to prioritize and stay focused.

One of my to dos is to clean up and organize the Glitterdome, my craft area. It's become more of a dumping ground. It is in a semi-finished area of the attic, so it isn't always comfortable temperature-wise. Today it's overcast so not as hot. We really need rain, the pollen has been so bad, but I think the clouds are just a tease. Most of the stuff in the Gdome is Krewe of Spank related (I have a whole closet dedicated to costumes and Pussyfooting stuff.) While up there I noticed the Sashed me and G wore during the "occupy PAN" years. Before Krewe of Spank, subkrewe of Krewe du Vieux, there was the Krewe of PAN. The year of limbo in-between coincided with the Occupy Wallstreet movement, so we were Occupy PAN. I was madam PANdemic. Oy.

The Glitterdome was a mess! So I got all OCD and cleaned it up. Much better! 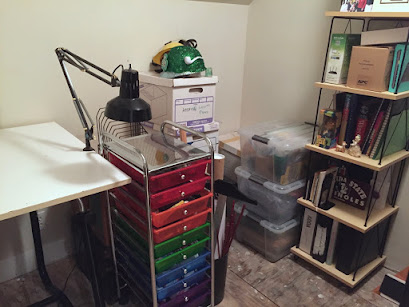 Posted by NOLA Cleophatra at 11:54 AM No comments:

Dusting off ye olde blog in these troubled times. I started blogging in troubled times following Hurricane Katrina. Here I am again. I helps me to write even if no one reads. 2020 has so far been an odd year. Mardi Gras in New Orleans this year was weird. It started with the Krewe du Vieux ball being moved the day of the parade and ball, due to safety issues. That was later followed with the Krewe of Nyx parade, when a parade goer was killed by falling under a float. I was 1.5 miles and 15 floats away with the Pussyfooters. When it happened, we were stopped in the Garden District. Word was going around about what happened, then the official word came from NOLAready. I decided to walk home, and not complete the parade.

The next night, the Krewe of Muses and all other parades were postponed due to weather. This isn’t odd, it has happened before, but the decision wasn’t announced until 2 hour before the parades were supposed to rolls. All the marching bands and other on-foot groups usually report to line-up 2 hours before the parade, so they were all dressed and on their way when the word came. Another float related death occurred during mega-parade Endemyion. Then, during Thoth, two riders fell off of floats, but were fine. The next night, two people fell off a balcony while watching a parade. Conspiracy theories relating it to the 2 victims still in the wreckage of the Hard Rock hotel (another fucked up ordeal) were flying.

G and I were sick with an upper respiratory cold in early January. I was happy we were both healthy before Blush Ball and Krewe du Vieux. We got sick again after Mardi Gras was over. I remember feeling it coming on my birthday, the day after Ash Wednesday. My Skeeball team threw me a small party, though I kept my distance so as not to get anyone else sick. I laid low and stayed close to home the following week and a half, so as not to get anyone else sick. We are still dealing with allergies issues due to the annual pollening, but so is everyone else.

The city is more-or-less shut-down due to the Coronavirus. Museums, bars, festivals, concerts, casinos–any large, public gathering–has been cancelled or postponed. French Quarter Fest has already announced it will be held the first weekend of October. All are waiting for Jazz Fest to make a similar statement. Restuarants can no longer have seated guests, but can do take-out and delivery of food. Even Commander's Palace is doing take-out. Their food is really good, but it is the whole experience of dining there with their amazing wait staff that really makes it. Some restaurants have closed down for good. I was really looking forward to the Irish Channel St. Patrick's Day Parade which would have been Saturday, and Super Sunday, but both were cancelled, for good reason. A bunch of people gathered on Saturday anyway and were shut down by the NOPD. Today is St. Patrick's Day and normally parties would be every where, but not this year. It is strangely quiet.

I am a pet sitter, and only one of my clients went ahead with her trip. So I have been going downtown, Canal at Magazine Street, since Sunday. Sunday was more or less a typical Sunday. There was some traffic congestion on Camp Street before the turn onto Canal. Tourist were lined up at Ruby Slipper for brunch, and tourists were checking out of their hotels, cabs and Ubers double parked. Monday was much quieter, still a small crowd in front of Ruby Slipper. Today there was no traffic, very few tourist, and Ruby Slipper was doing take-out only. Metered street parking spots were plentiful, a rarity.

I tried to pick up a few things from the uptown Rouses grocery store Sunday evening, but it was picked clean. Monday, I decided to head the Westbank on a quest for produce and eggs. The Gretna Rouses was a zoo, so I headed on over to Hong Kong market. Plenty of produce, noodles, frozen goods but zero eggs. The lines to check out were long and slow, as people had their carts piled high. (I wasn't worried about toilet paper, we have plenty from my last run to Costco. Can anyone explain the TP hoarding?)

Folks here in South Louisiana are used to preparing for hurricanes, but this is a different animal. We shouldn't have to worry about the water supply or electricity, though people are buying up water anyway. It's familiar. There is no where to evacuate to, unless it's in the middle of nowhere. Every morning comes the update from the city, with the rising numbers of people infected and deaths. So we hunker down.
Posted by NOLA Cleophatra at 3:37 PM No comments: