I was shocked and surprised to read today's headline in the T-P that Inspector General Cerasoli quit due to health reasons. I hope his health returns to the better soon and thank him for all he's done and has tried to do. He had to work against great odds and resistance from City Hall. Cerasoli is from Boston, another town known for government corruption. The article says "One main goal has just been to simply identify the entity that is the city of New Orleans, " Cerasoli said. "Nobody can give you an organizational chart." I bet there are a ton of people on the payroll who are unnessary and know that they are but keep mum. I hope we can hire another person willing to go up against Nagin and his crew. On the bright side, we are saddled with Nagin for only one more year and I have hope we can elect someone who will clean City Hall up.
Posted by NOLA Cleophatra at 9:47 AM No comments:

A new (new to me) sassy gal blogger: Rubypearl!

I loved this excerpt from a recent blog about things she does not like:

Old people who write checks in line in front of me. Get a Goddamn debit card! The technology is 20 years old, so it's about time for you to adopt it. You should be in a hurry, you don't have much time left, yet you choose to spend it crossing every t and dotting every I while I am DYING inside behind you.

Amen sister.
Posted by NOLA Cleophatra at 4:28 PM No comments:

Prospect.1 is over. Thankfully I managed to see a few exhibits, but not nearly as many as I would have liked. I had a friend visiting from LA and a friend of hers had sent her passes and a map. Kinda of strange since it's free but I think things like that may have made the numbers seem low. I never bothered to go "check in" and get counted. We had a map but it was hard to follow, I think they were really pushing for people to take the shuttle. 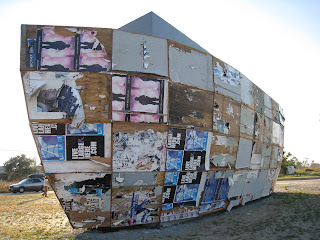 The big ark was all it was touted to be. There was something pleasing about it's simplicity. It's on the corner of Caffin and N. Miro in the Lower 9th Ward. I wonder how long it will stay? 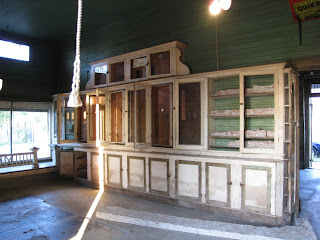 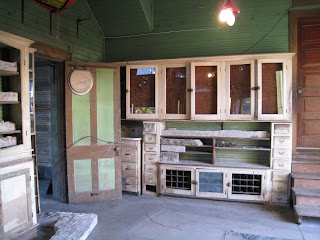 This was a neat building, an old hardware store that still had a bunch of old stuff around. The artists kept the items and arranged them. These two pictures are the lower floor. The building space was neat - the "art" was slices from a concrete slab, flipped around so you could see the underside where the cement flowed to fill the voids. It was interesting but didn't hold my attention all that long.

The upstairs was really cool. An artist painted swamp mural in all the rooms. 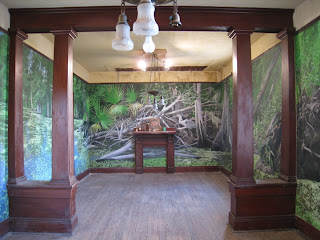 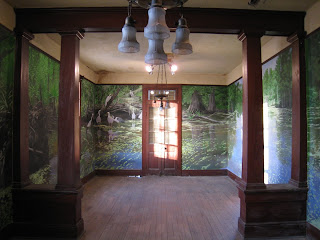 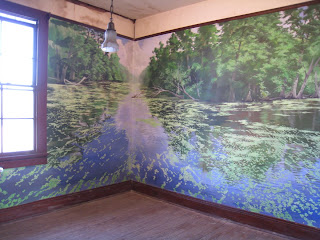 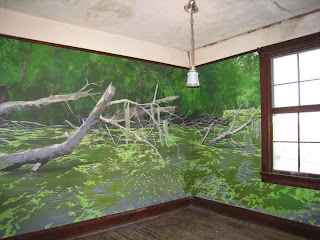 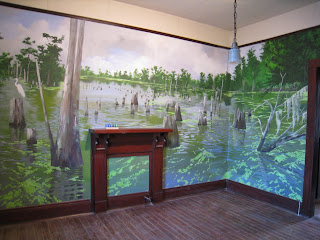 Here you can see some of the items from the hardware store I mentioned. Here the artist arranged some on the mantle. 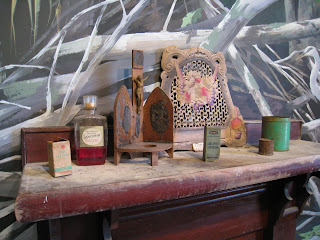 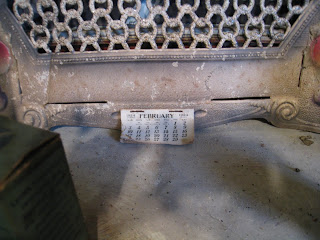 The spot for an exhibit is marked on the map but it isn't labeled as to what exhibit it is. The above I'm not sure where this was, maybe the Tekrema Center for the arts. One other site we visited, but didn't take photos, is the 19 center for the arts, a lovely little gallery in a shotgun double. One side was photographs, the other had a collage on the walls, like stuff being blown around in the wind. Both exhibits were worth the stop.
Posted by NOLA Cleophatra at 4:00 PM 2 comments:

I got my new flatware today. The stuff we had started to rust! It's very groovy and designer-y, which is perfect for us being designers and all.

I first spied it in one of the big box housewares stores, but they didn't carry any serving pieces. I pulled up the web site of the mfg. on my iPhone and found they were having a killer sale on a 65 pieces, service for 12 for $99 plus free shipping. Well, the bargain shopper in me could not resist that. It also has a 50 year warranty. I doubt I'll still be using this when I'm 90 but who knows?
Posted by NOLA Cleophatra at 10:55 AM 2 comments: