I now have a new G3 iphone. Humnahumnahumna

I’ll tell you what, it ain’t cheap and it ain’t easy. My business partner and I decided to get them and ditch the office landline. You’d think we were buying plutonium or something. We couldn’t pay for the two phones on the same credit card – only one phone per person. Then we have to wait almost 2 weeks for them to be ordered and arrive. My business partner’s out of town and even though I have the receipt from her phone I couldn’t pick it up for her because they have to see a picture ID. But wait, there’s more. You also have to pay a $300 deposit on each phone that gets returned after 12 months. But it sure is pretty and fun to play with. I’m not going to get any work done today. This may even cut into my Facebook time – oh no!
Posted by NOLA Cleophatra at 11:43 AM No comments:

Email ThisBlogThis!Share to TwitterShare to FacebookShare to Pinterest
Labels: technology

One month from now I will be on the road with my friend D somewhere between Augusta, GA and Albuquerque, NM. D is buying a car from a family member in Augusta and she lives in Albuquerque (a.k.a. "Duke City" - betcha didn't know that?). I love me a road trip, it's been a while since I've taken one (jaunts to Houston do not count). D is my hiking/camping buddy so we are going to stop along the way to hike as well as see the sights. I turn to you, oh glorious readers, to solicit suggestions of places to go/hike/camp and stuff to see/do/eat/drink. We have the option of going through either Birmingham Al or Nashville, TN on the first leg. We then go through Memphis. D's never been to Graceland so that's a must-see. G and I went many years ago. I see now that there is a "Heartbreak Hotel" near by you can stay that looks pretty tacky (as it should. Any rug on the walls?). After Memphis, it's all I-40 through Little Rock and Oklahoma City. We are all for interesting detours. I think I'd like to hit Hot Springs AK. Oklahoma I know nothing about...

So come on people. Tell me what you know. Thanks!

UPDATE: Talked to D... we decided to take the northern route. After getting through Atlanta, we'll head up to Chattanooga and Nashville. Then we'll detour and take the Natchez Trace (we explored the southern end back in January) to Tupelo then head towards Memphis.
Posted by NOLA Cleophatra at 12:07 PM 5 comments:

Why not. As I left my office and drove down Freret, in hopes of seeing the Ferret bus again, I decided to stop and check out the new, funky bus shelter at the corner of Cadiz. I was curious about it and so went to Google. Turns out it was the summer project for Design Corps. 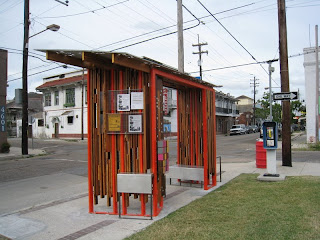 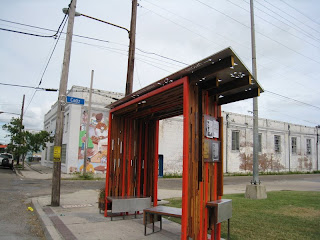 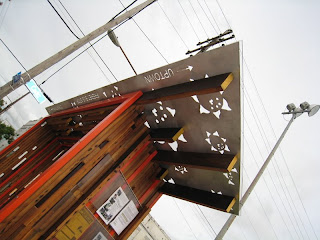 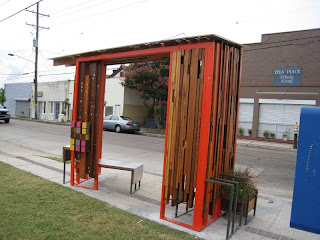 I think the orange and yellow colors were inspired by the colors of the signage for the Freret Market. The shelter has a place to post notices, a bike rack and those colored squares on the back side spin, which I'm guessing is for bored children to play with while waiting. It even has a potted plant. I love the metal roof that identifies Freret Street and the direction of uptown and downtown. It provides a shady place to sit and wait, though I don't it would do much to keep you dry in the rain.

My Google search also pulled up a blog by a young lady who spent 3 weeks in New Orleans and I think she did a lovely and insightful post.
Posted by NOLA Cleophatra at 8:16 AM 1 comment:

Email ThisBlogThis!Share to TwitterShare to FacebookShare to Pinterest
Labels: Freret

A picture's worth a thousand words...

But I wasn't fast enough. I was driving down Freret Street today and passed one of the new, groovy bio-diesel city buses. I was admiring the bus when I noticed the route info said it was "FERRET" Cracked me up. Maybe I'll go track it down... 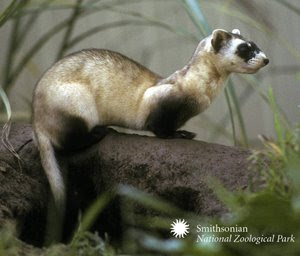 Posted by NOLA Cleophatra at 5:19 PM No comments:

Email ThisBlogThis!Share to TwitterShare to FacebookShare to Pinterest
Labels: Freret, whatever

This is crazy! You can pop corn with the use of a couple of cell phone. I gotta try it.

Email ThisBlogThis!Share to TwitterShare to FacebookShare to Pinterest
Labels: WTF?

I had to go through the archives for this one... I came across some JazzFest shots but that's too easy. I looked further and came across some photos I took at the funeral for Ashley Morris. I wasn't sure about posting it but reconsidered. Jazz Funerals are such an unique part of New Orleans culture. And it makes a great lead in to plug the "FYYFF Black and Gold Forever" fund raiser for Ashley's family Saturday, July 26. 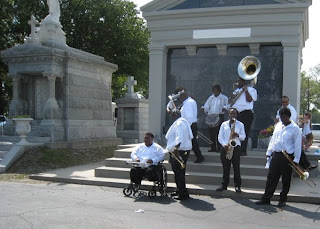 So I present to you the Hot 8 Brass Band taking five at St. Louis No. 3 Cemetery.
Posted by NOLA Cleophatra at 6:30 PM No comments:

This month’s “Babes, Booze and Books” book club meeting will be one to go down in history for us. This month’s selections were Streetcar Named Desire by Tennessee Williams and Music for Camelians by Truman Capote. Our fearless leader J had a smashing idea one night while out drinking with K, another Babe. She said we should discuss the books while riding the streetcar. She promised me we wouldn’t be “out all night” because she had a busy day the next day. We all gathered at J’s house. We started out with Brandy Cassis cocktails since Capote drank a lot of Brandy. J first proposed we eat after the streetcar ride, but a couple of us decided we need to eat before we drank so we helped ourselves to fried chicken, potato salad and the mirliton and shrimp casserole. We saved the red beans and peach cobbler for after the ride. (Our meetings are potluck and we are damn fine cooks if I do say so.) J then made a round of “Streetcars” – actually they were “Sidecars” but we rechristened them for the evening. Eventually, we made our way to Canal Blvd to catch the streetcar. We had to wait for a little bit, so J broke out a bottle of wine and plastic cups. There were nine of us and I’m sure the other people waiting there for the streetcar to ride to work were not amused. We encourage them to all board before us, since we had to finish our drinks before we could board. We sat in the back and started talking about “Streetcar.” We also took silly photos of ourselves, and I took the opportunity to shoot some video. I love the sounds of the streetcar.

We got off the streetcar and headed to the Carousel Bar in the Hotel Monteleon. Supposedly Tennessee wrote in the bar. I had never been, though it’s been on my list of things to do in New Orleans. Well, it’s a bar, and it looks like a carousel. The people sitting around the bar rotate, while the bartender stays stationary. The staff was great – the bartender cheerfully made nine cocktails with much flair, and the bored waiters were dancing to the lame disco that was playing. It was hard for all of us to talk together, so we ended up chatting in groups of three.

J then ordered us to get to-go cups because it was time to move on. We walked back to Canal to catch the St. Charles streetcar. We had to wait again, so J broke out munchies. When the streetcar arrived, it was packed! The driver kept picking more people up and they just had to cram themselves in. We had to physically pull people through the aisle when we came to their stop. Finally enough people got off we were able to sit. We got off at Louisiana Ave and walked over to the Delachaise. It too was packed and they had only one bartender working. If you’ve even been there you know how trying it can be to get a drink. J got frustrated, and was also upset to be told that Chef Chris no longer worked there (I hope that’s not true). She remembered we still had wine with us, so some of us drank that while a few who didn’t want wine waited (and waited, and waited…) for their cocktail. One of the babes pointed out it was after 10 and she has to be at work at 7am. We walked back to wait for the streetcar. And wait. A man who had come out of the Rite Aid told us to be careful walking on the streetcar tracks then asked where we were from. He didn’t believe were we locals until he and J started talking about cooking. Once again, out comes the wine and we shared some with our new friend.

By the time we got back to Canal Street to transfer to the other line it was 11:30. J asked the people waiting if they knew what time the next car would arrive. After midnight? TAXI! We took cabs back to the start. When we got back to J’s a few babes left but the rest of us dug into the red beans and sausage and the homemade peach coddler with ice cream. I got home at 12:45. So much for not staying out late.
Posted by NOLA Cleophatra at 3:04 PM 2 comments: 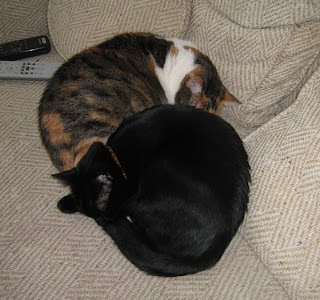 When in doubt... post a cat picture! Sleeping cats are pretty ordinary in our house.
Posted by NOLA Cleophatra at 10:32 AM 4 comments: 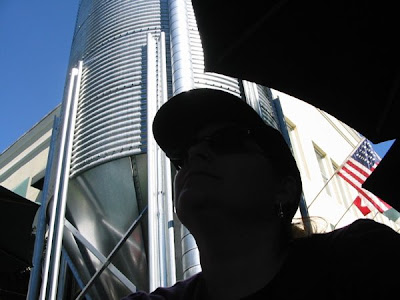 Independent from what I’m not sure any more. I for one plan on expressing my love of ‘Merica by stimulating the economy (‘cause it sure does need it), laying out to work on my tan (cancer schmanser), finally doing a blog post (incite the masses) eating and drinking to excess (the land of plenty) and lighting illegal fireworks (rebellion). Today I’ll drive over to Gretna and smuggle illegal fireworks into Orleans. Gee, I hope the cops don’t track me down from this post. Maybe they only troll MySpace pages. Actually, I’ll probably just get sparklers.

I’m glad to have a long weekend in which I am staying in town and have no big plans. Things have been busy around here with work, going out of town and neighborhood stuff. Along with the above I also plan on catching up reading blogs and answering email. It going to be too hot or rainy this weekend to be outdoors for long.

Speaking of neighborhood stuff…the POS house across the street is finally being renovated. And work is being done to Lyon’s park to take up the trailer park infrastructure up and return it to a field. I have to applaud city council for standing up to FEMA and getting them to get to work and lay sod at all the parks. 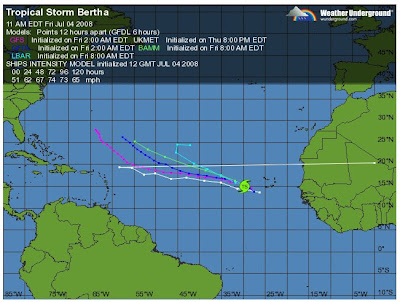 Looking up the weekend weather I noticed there's a TS out in the Atlantic. It's far off, but I was amused by the computer model that has it heading due east back to Africa. Add to the list this weekend: go through "disaster" kit...
Posted by NOLA Cleophatra at 9:45 AM 1 comment: