Halloween's a big deal in New Orleans. People here love any reason to get costumed up. Many people, myself included, have a costume collection. I have a small closet where all my wigs, costumes, and accessories live. Being in the Pussyfooters I get to dress up year round. Saturday we were in the Krewe of Boo parade that was an absolute blast! I found the cutest witch hat at the grocery store of all places, and built my costume around that. We all had to wear our pink corsets. Our colors are pink, orange, white and silver so Krewe of Boo is the rare chance to wear some black. Most of the pieces I already had. In addition to the hat, I bought the striped gloves and tights. I also found orange, battery operated Christmas lights that I sewed onto my tutu.


I also carved pumpkins this weekend. I knew they rot pretty quickly here thanks to our warm and humid weather. But this year was an exception. I put them out Sunday night, by Tuesday they were in my compost bin. 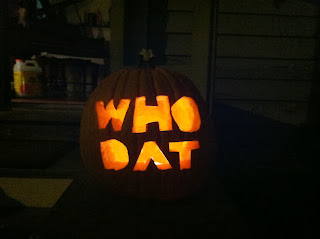 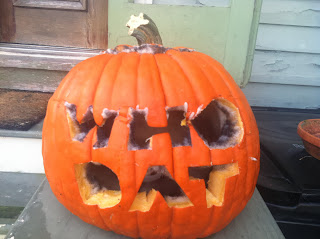 My next post was going to be about all the road construction going on in New Orleans, but before I could do that, I was over on the Yellow Blog where I discovered that things are heating up over at the French Market. Comments made by the new director, Jon Smith, have angered some French Market vendors. The vendors were already ticked off by changes made in Market rules in 2012 and they filed a lawsuit which is still pending. This article just gives more proof to how screwed up things really are at the French Market.

One sentence made me take pause: "T-shirts also are prohibited, but a number of vendors who sold them before the ban went into effect were grandfathered in." Before Katrina, many, myself included, was lamenting over the proliferation of tacky, tourist t-shirt shops in the Quarter. These stores would cram dozens of t-shirts, usually with crude sayings on them (like these), in the doorway, all the while blasting music, sometimes Cajun, sometimes not. It was really getting out of control. Since Katrina, there's been a new explosion of t-shirt shops by local companies whose New Orleans themed t-shirts are geared to locals and tourist in the know. Stores like Fleurty Girl, Dirty Coast and Storyville to name a few. T-shirts are a hot commodity so it's surprising the Market would ban them.

Tacky t-shirts are no longer the only thing that scream tourist. What are the (tourist) symbols of New Orleans? Crawfish, something playing the saxophone and beads. Beads are no longer contained to Mardi Gras. The tacky t-shirt shops also sell beads, beads, beads. Feather boas are big too. The hot trend in conferences is in addition to your big old name badge and printed bag is a fake second line. There have been several times I've been down river when a brass band comes by with a handful of people decked out in beads and feather boas stumbling down the street behind them throwing beads. Like this company says on their web site: "We go beyond shutting down Canal Street for your own “second line” parade, bringing in voodoo priestesses to conjure your future and teaching you the Cajun two-step." Under Services one of the "Program Enhancements" they offer is a Jazz Funeral. Good grief.
Posted by NOLA Cleophatra at 8:34 AM 1 comment: