This morning started out beautiful and clear. Sometime around 2:00 it started to rain. And it continued to rain. Then harder. And harder. Lots of thunder. I check the radar, and there was just a red dot sitting over Uptown not moving. I decide to stick my head out the door of my office and check on my car. Mine was OK but then a neighbor ran up saying my business partner should move hers. She couldn't open the driver's side door because water would get in if she did, so she crawled in through the hatchback. I ended up having to move my car a few feet because of the dip by the curb.

You could tell one the pumps were on because there was a current flowing down the street. You can sort of see it in the video. 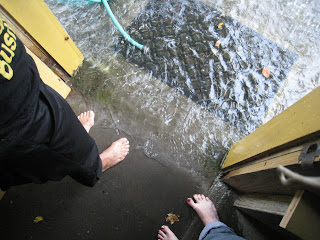 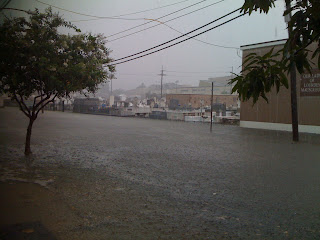 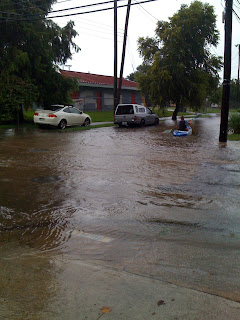 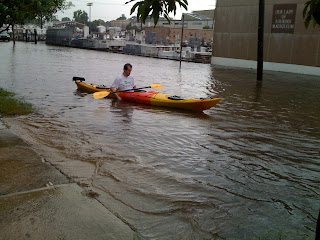 Details on all the hoopla going on tomorrow before the Saints game.

THE KREWE OF NFL KICKOFF PARADE travels through the heart of the French Quarter, stepping off at 5:00 p.m. (CT) on Esplanade Ave. and North Peters, heading downtown on Decatur and North Peters crossing Canal St. to Tchoupitoulas and ending at Julia Street.

There will be specialty NFL floats and throws (beads) in the parade. The Krewe of NFL Kickoff Parade will feature Blaine Kern Studios signature floats, the area’s finest marching bands, local residents, local chefs and former NFL greats from around the league. EMERIL LAGASSE, DICKIE BRENNAN, PAUL PRUDHOMME, FRANK BRIGSTEN, JOHN BESH, TORY McPHAIL & KATY CASBARIAN are among the local chefs and restaurateurs who will in the parade representing all members of the Louisiana Restaurant Association.

The floats of The Krewe Of NFL Kickoff Parade include:

The marching bands featured in The Krewe of NFL Kickoff Parade include:

There also will be 17 GMC vehicles featuring the NFL match-ups during Kickoff weekend in the parade.

The Krewe of NFL Kickoff Parade kicks off "NFL KICKOFF 2010 PRESENTED BY EA SPORTS,” the NFL’s ninth annual football and music festival. DAVE MATTHEWS BAND and TAYLOR SWIFT are scheduled to perform. NFL Kickoff 2010 will be televised live, from 7:30-8:30 PM (ET)/6:30-7:30 PM (CT) on NBC and NFL Network, leading up to the season opener between the Saints and the Minnesota Vikings at the Superdome (NBC, Westwood One Radio Sports, 8:30 PM ET). This is the seventh consecutive year the NFL has saluted the Super Bowl champions with the opening game in their stadium on a Thursday in primetime.

Fans may access the kiosks at the Jackson Brewery Lot along Decatur Street.

Posted by NOLA Cleophatra at 12:54 PM No comments: