Over the last month since my last post, I've Pussyfooted in 2 parades, marched in another, watched a ton of parades, celebrated my birthday, attended 2 more Mardi Gras Balls, bought a car, ate 2 monstrous corn dogs, went camping and continue to battle the crud. Pshew, no wonder I'm still tired. AND now trying to clear out Mardi Gras stuff to make way for St. Patrick's Day. 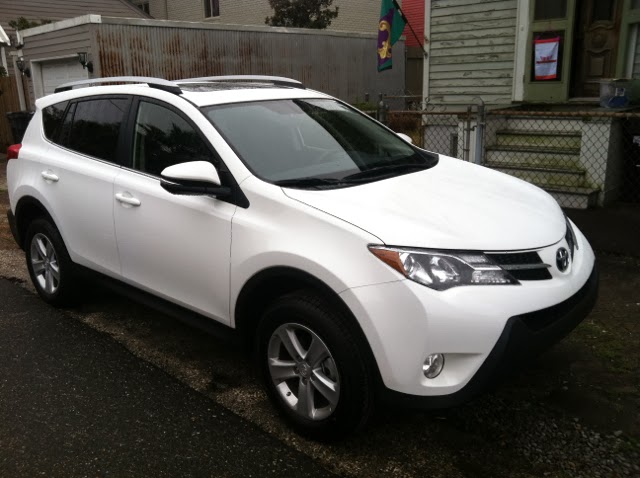 First of my new car! A Rav 4 I've named Barry White from Lakeside Toyota. The Rav4 and Honda CRV were my top two picks, both highly rated. My experience at Lakeside Toyota (ask for Mike Chosa) was far superior to the one I had at Royal Honda plus, it's closer to where I live for servicing. I love it!

This year, the Krewe of SPANK got to march first (after the title and royalty float) in the Krewe du Vieux parade. Our float and throws, especially the Dizneylandrieu Map, were highly coveted and beloved by the media. The weather wasn't bad and the crowds were big but polite this year.
More photos: NewOrleansLocal.com, nola.com, Offbeat.com and NolaDefender.com. We had Loki, a "GoogleGlassHole," with us and he took still photos and video of the parade.

In my previous post I said I was going to Pussyfoot in 3 parade. The first was Carrollton on 2/23 and it was a deluge. I was in denial it would rain, and never imagined it would rain as hard as it did. But we danced on and there were still people along the parade route! Every single piece of clothing I was wearing was soak through. Our new corsets bled pink dye all over everything that wasn't already pink. It was insane. I had been feeling better before this day but after that my cold came back. I dropped out of the Nyx parade and didn't even watch it. It was a cold, damp night and I decided it wasn't a good idea for me to be outside. Plus, the next day was my birthday!
The Krewe of Muses parade rolled on my birthday and I watched it over at our good friend's who always have an open house for it. The rest of Mardi Gras was a blur as I recovered from the crud.
Posted by NOLA Cleophatra at 12:32 PM No comments: