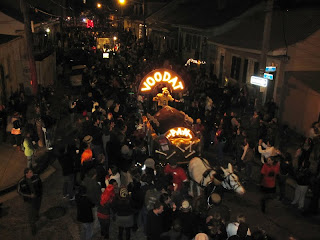 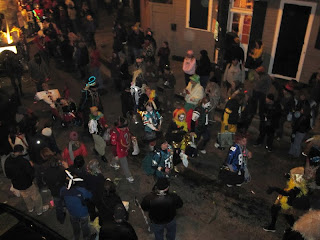 We had SO much fun with Krewe du Vieux and all the wonderful people of Krewe of PAN. Can't wait to do it again next year. However, today I am sore all over from walking, dancing and lugging a gym bag full of beads and throws. These photos were taken from a balcony on Royal street by G's cousin. I have a whole host of photos I took here.

The local rag, the T-P has a nice slide show of image from the parade. Our float made the front cover of the paper! Nice! VOO DAT!
Posted by NOLA Cleophatra at 4:03 PM 1 comment:

After living in New Orleans for 17 years I am finally participating in my first Mardi Gras parade. G and I were invited to join the Krewe of PAN, a sub-Krewe of Krewe du Vieux, 2 weeks ago by Adrastos and Dr. A. It's been a very busy 2 weeks as we helped with the float (well, we mostly stood around, drank beer and held things when needed), created gris gris bags for throws and ran around town buying throws and parts for our costumes. Our Krewe's theme is VOO DAT and I will be dressed as a Miami Dophin voo doo doll. I'm glad I didn't decide to be a Saintsation cause it's gonna be bone chilling cold tonight! Therefore, you can be guarenteed the parade will move fast like last year. It's been fun getting to know the other krewe members and using our creative juices for some fun stuff. I'll post pics tomorrow.
Posted by NOLA Cleophatra at 1:11 PM 1 comment:

There's been an uproar over the NFL sending cease and desist letters to small businesses who have printed shirts using the phrase "Who Dat," fleur di lis and the colors black and gold. The uproar has been as loud as the joyous yells just after the Saints won the NFC Championship against the Vikings. New Orleanians don't like corporations trying to capitalize on our coloquialisms. About 10 different groups have popped up on Facebook in protest, and people are tweeting like mad. The debate about who owes the right to the phrase is on going.

What's next? "Geaux Saints"? People in So. Louisiana love to give things a Cajun twist like spelling Go Geaux (dat's French cher). We can't use "Superbowl" or "The New Orleans Saints" all owned by the NFL. Here's an alternate: It's a black and geauxld, whoux dat supahbowl!

"Who might that be who claims they can beat the football team from New Orleans." just doesn't have the same power as the Who dat chant.

Then Senator Vitter, of all people, jumps in the fray and pens a letter to the NFL telling them to drop the suit or sue him.

Will the NFL back down?

Email ThisBlogThis!Share to TwitterShare to FacebookShare to Pinterest
Labels: Super Bowl, The Saints, Who Dat Nation

"The Soul of New Orleans"
A beautiful and moving video.
Posted by NOLA Cleophatra at 2:31 PM No comments: 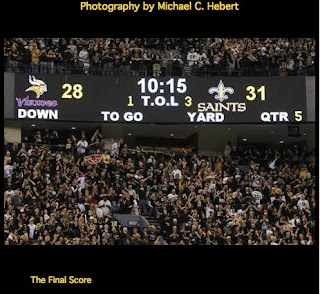 Highlights from the NFC championship game.

Saints 31, Vikings 28 and the Saints advance to the Superbowl.
"Pig have flown. Hell has frozen over."

UPDATE: Another great video of highlights with audio of what players and coaches were saying on the field.
Posted by NOLA Cleophatra at 2:34 PM No comments:

Email ThisBlogThis!Share to TwitterShare to FacebookShare to Pinterest
Labels: The Saints

The Saints are going to the Superbowl, first time ever. Everyone has Who dat!! fever. Work isn't getting done. Black and Gold is every where. All everyone can talk about is the Saints. I too am guilty of all of this. I'm sure the Facebook friends of all of us Saints fans are probably sick of all the video postings, fleur de lis and and Who Dat! But the energy here in New Orleans is amazing.

Sports announcers kept saying "Mardi Gras has come early." I hate to tell them technically it's BEEN Mardi Gras since Twelfth Night. But we'll forgive them. Normally this time of year houses are decked out in purple green and gold, like the one below, but there seem fewer than usual this year. 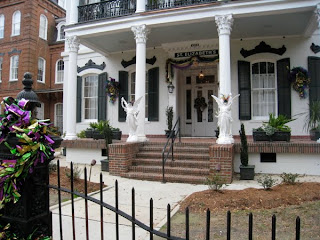 Others have gone black and gold: 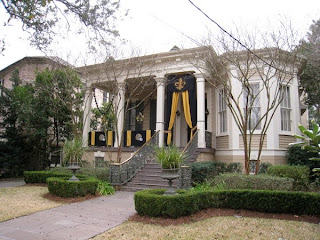 And others have mixed it up: 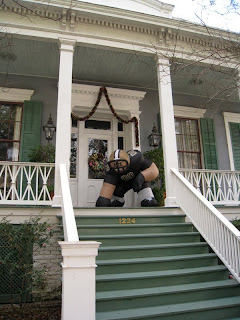 We watched the game at our usual spot, the Rendezvous. I was half deaf by the end of the game from all the hooting and hollering. It was loud in there, I can't even imagine how loud the Dome was. When the winning kick was good, everyone was jumping up and down yelling and hugging each other. We spilled out on the the side walk. Cars were driving by, honking. People were hanging out of their car windows, hi-fiving people standing along the street. We moved down a block to where there was a bigger crowd. People were dancing in the street, traffic was at a stand still. A city bus came by. The driver stopped to high-five people then made the bus "dance" by making it kneel. He finally moved on and a cop car with the lights going pulls up. Over the loud speaker "Stay out of the street please. The sidewalk works much better. The Saints are going to the Superbowl." And this was happening all over the city. This was probably the first night that Bourbon Street was actually full of locals. We have two weeks to bask in this. Going to the Superbowl was the prize. Winning? Would be lagniappe. The Superbowl maybe in Miami, but the party to be at will be the City of New Orleans.

Email ThisBlogThis!Share to TwitterShare to FacebookShare to Pinterest
Labels: Mardi Gras, The Saints

I've got Saints fever and the prescription is a Super Bowl win!

I'm not used to having to juggle football and Mardi Gras. In the past football, pro and college, was over for me about the first week in January. But not this year. Da Saints are marching in, with a play-off match up in the Dome Saturday. Everyone was excited about the game, but it got bumped up when it was announced the Saints had resigned Deuce McAllister. He didn't play but he was team captain. I watch the game at the Rendezvous on Magazine street and while there were two rounds of "Reggie! Reggie! Reggie!" there were at least two if not three "Deuuuuuuuuuuce!"

Football. It allows men to hug and women to curse like a drunken sailor. I wish I had a dollar for every f bomb one girl dropped. It was her birthday, as she liked to keep reminding everyone, over and over, so I'll forgive her. Football allows me to get in touch with my inner dude. By the end of the game, my throat hurts from yelling, hands hurt from clapping and hi-fiving.

Friday night I went to the Pussyfooter's Blush Ball which was a total blast. Great party and I loved the 610 Stompers. Saturday before the game went to the den of Krewe de Vieux to work on the Krewe of Pan's float. Looking forward to the parade. It will be a first for me being in a parade.

WHO DAT?!
Posted by NOLA Cleophatra at 12:44 PM No comments:

Happy New Year! And boy am I happy the holidays are over. Or are they? I took down the Christmas decorations yesterday. In a couple of days the Mardi Gras season kick-off on Twelfth Night so up will go the purple, green and gold. Or should the black and gold for the Saints go up first? The city is so pumped that the team has made it to the play-offs. The end of the season has seen a slide in their performance. Today was their last regular season game with a final record of 13-3 with a loss to the Carolina Panthers. Several Carnival krewes have canceled their parades become they fall on the same night as the Super Bowl. Saints players will be riding on floats, Tom Benson will be Grand Marshal of the super krewe Endymion.

For me an end of a football era has passed. Bobby Bowden has at long last retired from FSU football. They won his final game in the Gator Bowl against West Virginia. Since FSU isn't in the SEC they don't get much press coverage around here. This fall, a Seminole Club was started so I've had other alumni to watch the games with. It was bitter sweet as we watched the FSU victory. When it was all over, you would have expected us to all be hooping and hollering with the win, but it was mellow with the sadness of the leaving of The Bobby. Part of the sadness was that he wasn't ready to leave yet. He wanted 400 wins before retiring. But the team hadn't be performing as well as they once did and it was awkward to have a head coach you didn't know when he was retiring and a "head coach in waiting."

I was only 9 when he became coach; some of the people in the Club weren't even born! It's going to be weird next year to not see him on the sidelines. He was a great coach and a class act. To bad CBS sucks in their coverage and the audio dropped out during Bobby final comments. I'm sorry we missed the half time tribute to him. But I found a video on YouTube. And I loved him planting the spear.
Posted by NOLA Cleophatra at 4:50 PM No comments: