No posts about the BP oil disaster. Just too overwhelming. Just plug the damn thing up and clean our coast and gulf up.

Keep eating Louisiana seafood please, there are still some not impacted fishing zones as of now. Keep the fishermen who can work in business.

If you want to donate money, here are a few good organizations:

These help the ecosystem:

Voice of the Wetlands: http://www.voiceofthewetlands.org/

These help the people impacted on the Louisiana coast:

The Greater New Orleans Foundation: http://www.gnof.org/
Posted by NOLA Cleophatra at 11:22 AM No comments:

Another JazzFest has come and gone. I only went two days this year - the first Saturday and Thursday. The Thursday has always been my favorite day. "Locals Day" much smaller crowds, no lines for anything.

Saturday we saw: Bonerama, Papa Grows Funk, Big Sam's Funky Nation,Terence Blanchard, Treme Brass Band, Dr. Michael White. We saw the first half of Simon and Garfunkle but were somewhat dissapointed so we scooted over to the Blues tent to catch the second half of Tab Benoit's set. He was tearing it up! We also saw the parade " Kirk Joseph & the Sousaphone Symphony Parade honoring Anthony “Tuba Fats” Lacen" with 15 tubas! 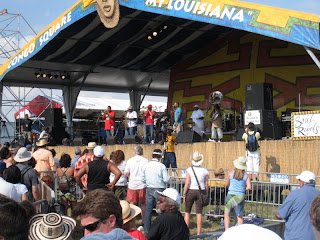 Soul Rebels - the nice thing about Thursday you can get up closer to the stages. 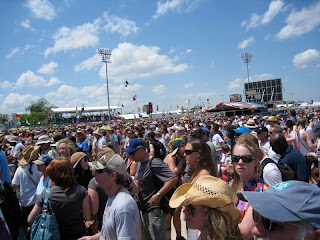 We were up front for Dumpstafunk. This is looking back at the crowd.
The down was the BP Deepwater Horizon oil rig explosion and the oil leak (leak? geyser is more like it) that followed. 11 men lost their lives, hundreds of fishermen will lose their livelihood and thousands of marine animals and bird are suffering not to mention the damage to the coastlines and beaches of 4 states. And BP is hemmoraging money for the clean up. As of this time still waiting to hear why this happen. Here in New Orleans people are eating and buying up seafood for the very real fear it will be in short supply for years, which of course will drive up the cost. It remains to be seen how this will affect shipping in the ports of New Orleans and Mobile and the price of gas.

Another Up - New Orleans has a new mayor! Mayor Mitch Landrieu was sworn in to day. Can I get an amen?! I'm more excited about the departure of Ray Nagin but I do hope Landrieu can turn things around and actually get things done and be accountable. It's pretty easy for him to look better and accomplish more than Nagin.
Posted by NOLA Cleophatra at 12:39 PM No comments: