Spinal Tap is Back! "Back From the Dead"

It's the 25th anniversary of the original release of the mockumentary "This is Spinal Tap." I LOVE that movie. And I love that "the band" managed to release albums and tour in spite of not being a real band, not originally.

Their website rocks and they have fully embraced all the new media available. No Facebook page though? I downloaded the Spinal Tap app for my iPhone. You have to be careful where you use it. Every time you launch it, it starts cranking out a song.

The new CD is over the top as well, with a pop-up diorama of the band.

So of course I'm thrilled that Harry Shearer will be the key note speaker for this year's Rising Tide Conference. I missed it last year, but am already registered.
Posted by NOLA Cleophatra at 12:07 PM No comments:

This afternoon I am jetting off the the "Land of Enchantment" otherwise known as New Mexico. Time for my annual hiking/camping trip with my friend Dorie. Really looking forward to it. I learned my lesson - no more traveling far during the peak of hurricane season. Darn Gustav cut my road trip vacation short last year. Nothing in the Atlantic right now. Pshew. Not sure where we are going yet... we like to be impulsive that way. It's going to be a quick one since Dorie is still in school. I'll be back home Monday.
Posted by NOLA Cleophatra at 1:10 PM No comments:

There hasn’t been everything out of City Hall regarding recycle in a while. There was the survey they did back in April 2008 I blogged about here and here.

Before that T-P did this article November 2007 about how the City's 2008 budget was not going to include recycling.

[Veronica] White said that, in light of other pressing needs, the city cannot afford recycling, too.
"I need to have money to recycle," she said.

Midura said she realizes that the city's recycling program, like most across the country, never drew enough participation to generate sufficient savings in landfill disposal costs to cover its own expenses. But she said the city still should provide the service because of its environmental benefits, even if City Hall has to subsidize it.

At what point are the landfills so full and costly that recycling is a cost saving measure?

I cough up my $14 monthly fee so the Phoenix recycling will come pickup my paper and plastic. They stopped collecting glass last year, which is really annoying. STD offers curb-side recycle for a fee, and I now learn from Gambit that there is yet another company offering it, The Pooh Bah Group.

Pooh Bah is cheaper than Phoenix, only $10 a month. I sort of want to continue to support the first company who started a recycling program post-K but I could save $48 a year. What I want to know is how can 3 competing companies offer curbside recycling if there’s no money in it???? I don’t understand.
Posted by NOLA Cleophatra at 8:00 AM No comments: 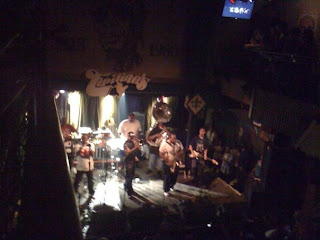 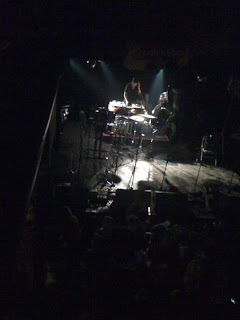 My friend K and I are trying to not take New Orleans’ fantastic music scene quite so for granted. I don’t have the stamina I once did to go out late to see music, especially not on a work night. We took advantage of Tipitina’s Free Fridays a couple of weeks ago and saw a great show with Soul Rebels and DJ Soul Sister. Even though the place was packed, we scored a great spot upstairs. Last night, we ventured to d.b.a. It’s been a while since I’ve hung out on Frenchmen Street. It was hopping last night. I was pretty surprised for such a crowd on a night in July, but what do I know?

Lost Bayou Ramblers were playing. A great young Cajun band out of the Lafayette area (a.k.a. “Cajun Country”). K and I had the pleasure of discovering these guys at the Creole Tomato/Cajun Zydeco/Seafood Festival back in June. It was a blistering hot Saturday afternoon. We walked around for a while, had lunch but it was just too hot, so we parked ourselves in Café Angeli and had some cocktails. Once we had cooled down and had a nice buzz we wandered back to the music stage to catch the end of Sunpie and the Louisiana Sunspots set. After Sunpie, the Ramblers came on. 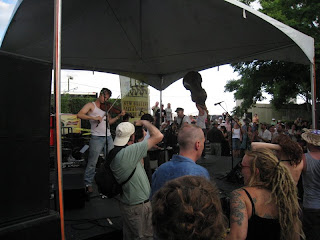 About half way through their set, the power went out. This did not deter them in the least. The bassist unplugged himself and jumped off the stage into the crowd. The rest of the guys followed suit with the drummer grabbing his snare from his drum kit. 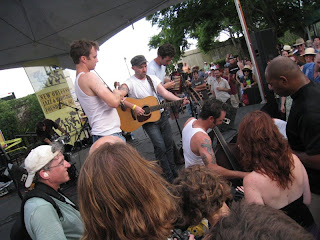 They moved over to stand on some steps near by and the crowd followed them, clapping keeping time. Sunpie had been dancing in the crowd when this all happened. He rushed off to grab his accordion and joined in. I don't know if the techs got the power back on, but nobody cared. It was one of those magical musical moments. 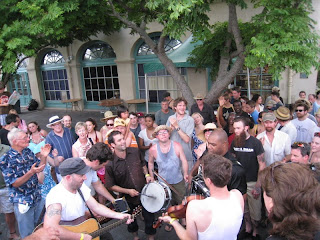 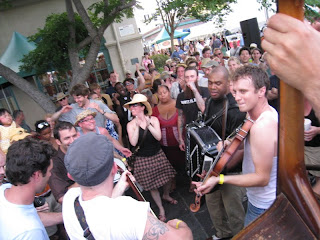 Posted by NOLA Cleophatra at 4:02 PM No comments:

Last fall I did a post about the former Copeland's Restaurant on St. Charles Ave. and Napoleon Ave. from an email I recieved about the proposed new restaurant. link

The T-P had a story about it today. link

In my almost daily drive-bys on the way to the office I've notice some minor activity at the site. I was wondering if the seafood place would happened. Maybe it will.
Posted by NOLA Cleophatra at 9:09 PM No comments: