You don't have to be crazy to live here but it helps.

I survived my trip, but just barely. Day two I went on a rafting trip. The river was running high, fast and very cold due to all the snow melt. We hit a rapid the wrong way and everyone got thrown from the raft except the guide. Two manged to swim to shore, me and another guy got pulled back into the raft. Never been so cold in my life. Scared the shit out of me and I got some lovely bruises. One guy twisted his ankle really bad. But we all were OK and we only lost 3 baseball caps and one paddle. 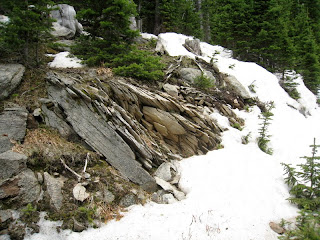 That white stuff is snow, my friends. Up to our knees in some places.
It's always interesting to travel-you realize just how dysfunctional yet unique New Orleans really is. The first week of my trip was small spent in small, charming mountain towns in the southern half of Colorado. One day were were so high up in the mountains that the snow still hadn't melted. The second week I was in Denver for a conference. Denver is huge and flat. Who knew? It's very clean and there's a good mix of older buildings and new ones. I thought "this is what it's like to live in a town with a robust tax base." I like the funk of New Orleans though, and Denver seems like it tries too hard. My friend and I visited Pearl Street, billed as "unique shops, excellent dining and community minded businesses nestled in a delightful, pedestrian and pet friendly setting." All three blocks of it. Whatever. It pales compared to Magazine Street which is 6 miles long full of shops, restaurants, bars and galleries. 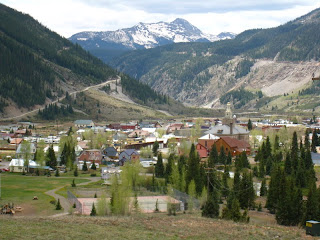 Cute, mountain town of Silverton.
I did have an interesting experience. I have friends in Denver and they picked me up from my downtown hotel and took me to their house for dinner. I was there for about 5 minutes when the power went out. It was a very hot day so we all assumed it was a brownout. But it stayed out. Thankfully they lived within walking distance of some restaurants so we headed out. This was no brownout, traffic lights were also out. My friend pulled up the news on her Blackberry - an electrical substation had exploded and thousands of people were out of power! We were lucky there was an area near by that had power and we were able to have dinner. They took me back to my hotel around 9pm and it was creepy. It was dark, no lights, no traffic lights - very reminiscent of parts of New Orleans after Katrina - plus smoke. Thankfully downtown had power so my hotel wasn't affected.

Getting back to crazy; I come home to extreme heat and humidity, the start of hurricane season and the on-going oil "spill" in the gulf. I won't lie, it was a relief to be away from all the bad news for a while. As well as away from the humidity. But we do find ways to distract ourselves and make it worth it to live here: incredible food, amazing music, copious amount of booze available 24/7, the laissez faire attitude, Mardi Gras, festivals and other crazy things. For example, I just found out today I got accepted into the Pussyfooters, one of the female dance troupes. There are others; Camel Toes Steppers, Bearded Oysters and The Muffalottas. I also play on a Skee Ball team every Thursday. Excuse me, it's a skee ball and drinking league. The guy who formed the league just made this great video. I'm a member of two Mardi Gras krewes, so I get to dress up in costumes and parade through the street with a drink in my hand, throwing stuff at people-it's really a hoot. If you are thinking "grow up" then you don't have the right attitude to live here. Yes, people do have jobs, pay bills, own homes and raise families. We just like to have fun while being all grown up and responsible.
Posted by NOLA Cleophatra at 3:54 PM 2 comments: