After donating last year’s canned goods in a recent food drive, I stocked back up for this season. Still need to get water… turns out there was a gallon from 2 years ago in the back of the pantry. It sprung a leak. That’s why the “use by date” is 2 years from when it’s bottled: isn’t not that the water goes “bad” but the plastic just can’t hang anymore.

Today’s paper had a special hurricane preparedness section with checklists, contraflow maps, lists of this year’s storm names, etc. I think even more helpful was Saturday’s column where readers sent in their thoughts. Another article that really interested me was “Airport a vital escape route from storms.” What fascinated me was this:

During Hurricane Gustav, federal officials originally wanted to stop flights about 10 a.m. on the day before the storm made landfall, but airport officials were able to get a few more hours of flying time, Wilcut said. "That allowed us to get a lot more people out of the city," she said.

The last flight out was Aug. 31 at 6 p.m., according to news reports. The storm made landfall the next morning about 10:30 at Cocodrie.

As Gustav made its way towards Louisiana, I was road tripping from Georgia to New Mexico. Aug 30 Aug 31

I’m glad the airport didn’t close at 10 am August 31, because I would have been stuck in Dallas. I was in a serious race against time to make it back to New Orleans to help Greg evacuate. My friend in Albuquerque said I was welcome to stay as long as I needed to, but I would have lost my mind. I couldn’t even sleep the night of the 30th, I was so amped up with a singular thought “I must get home.” Not only would there have been a period of time during the height of the storm when I would have no idea if Greg was OK, but who knew how many days it would have been before the airports reopened. As you can see, after Gustav it was a few days. After Katrina, two weeks. One of the most important lessons I've learned about hurricanes and storms is no two or exactly alike.
Posted by NOLA Cleophatra at 3:35 PM No comments:

Last Saturday we squeezed two festivals into one day. We needed our Sunday to do the mundane weekend chores.

First was the Greek Fest. Held every year at the first Greek Orthodox Church to be established in America back in 1866. It’s on Bayou St. John near the lake. The day started out gray with rain in the forecast, so we didn’t bother with hats and sunscreen and packed ponchos instead. An hour later it was full on sun. Oops. 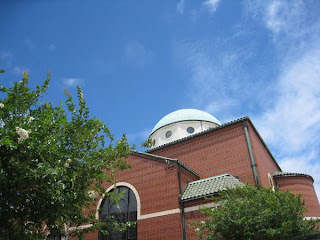 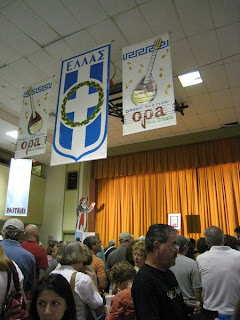 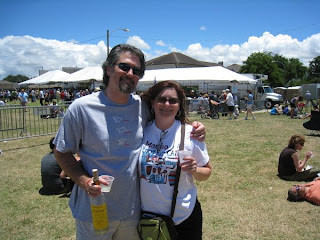 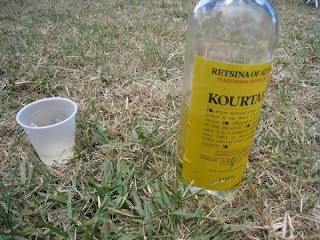 We spent a few hours consuming a smorgasbord of Greek delicacies, a bottle of retsina wine (tastes like drinking water from a Christmas tree stand, but in a good way), browsing the market place, chatting with friends and taking in the music and Hellenic dancers. It had been a number of years since we had been (it’s usually beastly hot, which isn’t fun) and it has grown considerably in size; they apparently bought more land, probably after Katrina. Opa!

We then went to the other end of Bayou St. John for Bayou Boogaloo, a festival of local music, crafts and food vendors. 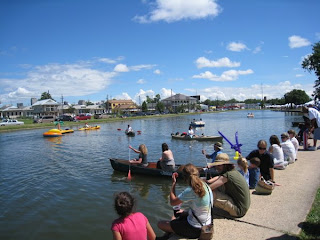 Floating in the bayou seemed to be the place to be. Shade was limited and what shade there was, people crammed in under. 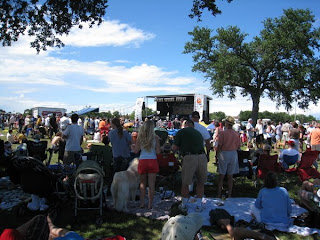 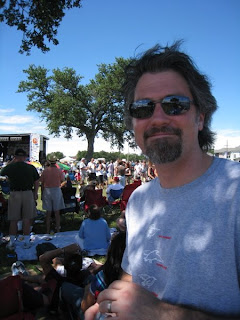 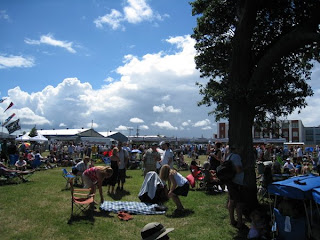 The music was great – we were too full to eat anything else – checked out the crafts and bumped into more friends. We only stayed a few hours because it was really getting hot.
Posted by NOLA Cleophatra at 2:02 PM 1 comment:

May 11, 2009 – Day 20
Irish Channel N.A. hears rumors about extent of vandalism and the possibility that the pool will not open this summer.

May 12, 2009 – Day 21
1st Email Sent to Councilman Fielkow and Councilwoman Head asking them to inquire about Lyons pool. These inquiries are forwarded to NORD and others for follow up.

May 22, 2009 – Day 31
NORD Director and Capital Projects Administrator address status of Lyons Center pool at a City Council subcommittee meeting. They state that they expect the pool to open by 2nd week of June. NORD was awaiting Entergy to install a pole to provide power to the pool pumps, at which time they could test the pumps. It was also reported the center had been broken into earlier that week and one person arrested. At the same public meeting a petition was presented to NORD Director and Councilman Fielkow with 196 signatures from neighbors asking that Lyons Center be opened. All signatures collected in less than 2 weeks.

Part of the press release that addressed Lyon’s Pool:

Unfortunately last month, the Lyons Center was damaged as a result of copper theft. The facility has been secured and further security measures, are being evaluated at this time. Understandably, the theft and resulting damages, have delayed NORD's plans to reopen the Lyons pool in June, but, NORD and Capitol Projects will continue to move forward with repairs and have targeted a late summer date to open Lyons Center pool.

The lyons opening is inconsistent with the public testimony bill provided friday to the youth and rec comm. At that hearing, it was represented lyons would be open in mid june. How could your position have changed in 4 days? This is a major setback for the community!

At this time, we wait for any further clarification on the matter.
Posted by NOLA Cleophatra at 4:43 PM No comments: 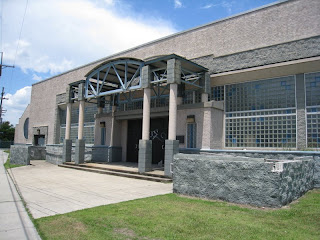 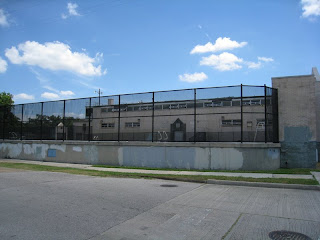 NORD's Lyon Center is in my neighborhood. No renovations have been done since Katrina. Last July at the Mayor's Round Table I attended last August a representative from NORD said that the Lyon's Center was under Architectural review and construction would start the end of the year. No work has been done since then.

Last summer the pool was open and kids from all around went. These are kid who parents can't afford to send them to a summer camp. And it's hot down here in the summer. The pool is a safe, supervised opportunity for the kids to have some fun.

April, two men were arrested after doing over $300,000 worth of damage to the Lyon's Center. Here's what someone from NORD emailed us about the damage:

There was substantial recent vandalism to the facility:

We have assigned an architect to the project- have to get the contract through the process- but never anticipated this most recent and significant damage of this extent and nature that will now have to be addressed. Of course with our high insurance deductibles the repair cost will be borne by the most part by the City. There are bond funds available ($1.7M)which were supposed to go toward overall improvements which will now have to be used for this remedial purpose. There is little to no likelihood that FEMA will even entertain the idea of any funding to address that vandalism. It is my understanding that the thieves were apprehended but any help that Council could give making copper theft less attractive will greatly help our and thousands of others efforts in the recovery. We will do what we can but this is a major blow to that facility which will be exceptionally costly and time consuming to repair.

Why wasn't the building better secured and monitored? That much damage can't be done in a day. Plus when the arrest was made there was evidence that people were living in the center!

So I started a petition, to be presented this Friday at meeting with the City Council, NORD and FEMA, stating it is NORD's responsibility to do what need to be done so that the pool can be opened this summer. If you agree, PLEASE sign the petition and tell your friends. THANK YOU! 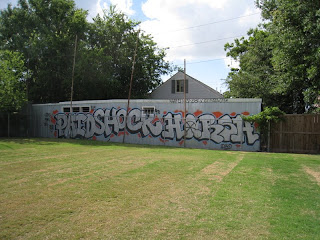 We have a long metal shed across the back of our property that backs up to a field. One day in the last week or so it got tagged. Big time. I'm not sure how I feel about this. 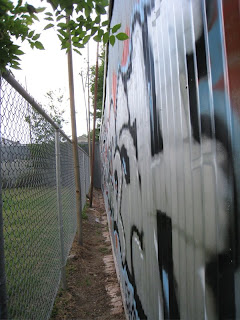 I am amazed they were able to work in such close confines. There's only about 14 inches between the fence and the shed. G discovered graffiti artists wear latex gloves because he found some along with empty spray paint cans.
Posted by NOLA Cleophatra at 4:41 PM 2 comments: