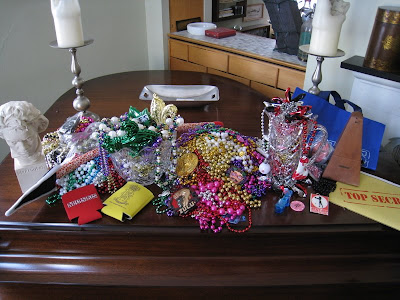 Some of this year's parade booty.
So I survived another Mardi Gras. When I first moved here, I went to as many parades, concerts and parties as I could. After a few years, the novelty wears off and the stamina wanes. The couple of times I lived on the parade route and embraced it fully. There were years where I went out of town or stayed in town and tried to avoid festivities. You can’t avoid Mardi Gras here; that’s like trying to avoid Christmas. There are Mardi Gras decorations, songs, special foods, parties, and it’s every where. There are also good Mardi Gras experiences and bad ones. Since Katrina, we’ve stayed and played. I’m still recuperating, but I think a lingering cold may have something to do with that.

First parade was Krewe de Vieux, Feb 7. They parade in the Marigny and French Quarter and walk the route with small, satirical, plus some vulgar floats. G hates the French Quarter and never wants to go. I had a plan and a back up plan. Plan A: meeting people in the Marigny, fell apart because we left late (my fault). Plan B: go to friend’s gallery on Royal Street went into action. We parked, hoofed it across the Quarter and had dinner at Gato Negro. Some neighbors sat next to us and we all discussed how KdV never starts on time and they would be slow so we were fine with time. We finished dinner and walked over to our friend’s gallery. Much to our surprise the parade had already passed! So we did a quick 180 and scooted over to Decatur, as did everyone else in the Quarter. The last few floats went flying by at warp speed. G refuses to go ever again.

Krewe of Muses signature shoe float.
Their most coveted throw is decorated shoes.
You get spoiled living in the part of Uptown we do where you can walk a few blocks from your home to the parades. Having to get in a car, drive and park? We scoff at that notion. And we’ve learned to be selective about which parades we attend. Thursday before Mardi Gras (this year Feb. 19) is Muses along with Babylon and Chaos. Muses is hands down one of our favorite parades: it’s beautiful, funny, lots of marching bands, with creative throws. Bonus this year is the new extended Uptown route now starting at Jefferson and Magazine. It was a joy to see Muses and the other parades on Magazine. No huge crowds or obnoxious walls o’ ladders. Some friends of ours have a party for Muses so that makes it even more enjoyable. At any time a parade can stall and this night there was about an hour delay as a Chaos float broke down. Muses stood still on Magazine in front of us. People walked around, some went back to the party for more food. A friend visiting from out of town found me, so we sat in some chairs and caught up. This seemed to be the year of speeding parades. Once Muses started rolling they flew by. I was trying to find friends in the dance groups but only found one. Speedy parades are no fun because you can’t take in the whole float decoration and you catch less throws. 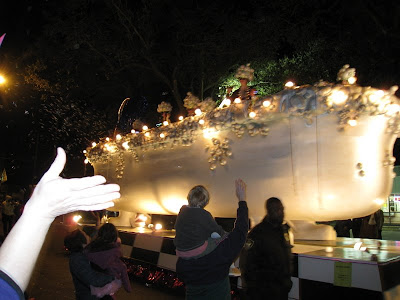 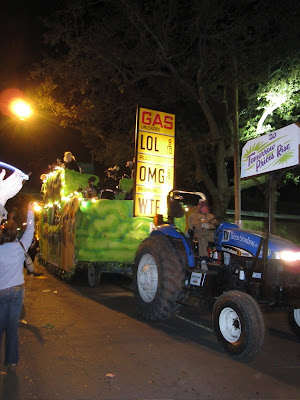 The last photo I took before my battery died. Boo hoo.

G and I took Friday off, walking from our house to a restaurant for dinner, then over to our usual Friday night hangout for drinks. 5 blocks away the parades were rolling, but in “the pocket” (we get surrounded by all sides by parades and can’t leave via car), it was quiet. We ended up skipping all parades Saturday. We had plans to go Mid-City since several friend were having Endymion parties. I just didn’t have the energy for it thanks to the earlier mentioned lingering cold. Since there are no Uptown parades that night, we ventured outside of the pocket for dinner and had a quiet night.
Posted by NOLA Cleophatra at 3:55 PM 2 comments:

Tonight kicks off the first of 5 consecutive days of Uptown Mardi Gras parades. I get paraded out so I don’t go to each and every parade like I did when I first moved here. Twice I’ve lived on the parade route and that kind of spoils you too. But the Mardi Gras buzz is in the air.

Port-o-lets dot the neutral grounds and this particular one caught my eye. The signs on it says “Donations $1.00” “Pee for Paris” “5th Grade French Audubon Charter” A 5th grade French class is raising funds by letting people use their port-o-let. How funny is that? I may go by and donate a dollar. 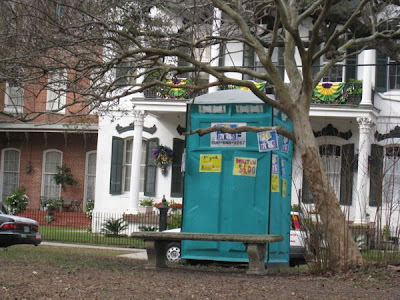 People ask “have you been to Mardi Gras?” that’s like asking “have you been to Christmas?” It’s a holiday season and people decorate their house like they do for Christmas. The green and red get switched out for purple green or gold. 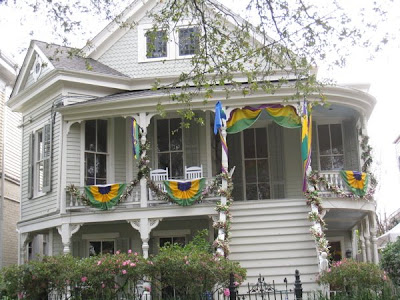 My favorite Saint gets released. (link)

He’s such a class act. Too bad more athletes aren’t like him.

Posted by NOLA Cleophatra at 2:22 PM No comments:

Email ThisBlogThis!Share to TwitterShare to FacebookShare to Pinterest
Labels: The Saints

Such a festive weekend! Friday the 13th (not the stupid movie) followed by Valentine's Day. Monday is President's day, but in New Orleans we don't really observe President's day because we observe Mardi Gras day instead, which falls on Feb. 24th this year. And this weekend the parades are rolling. 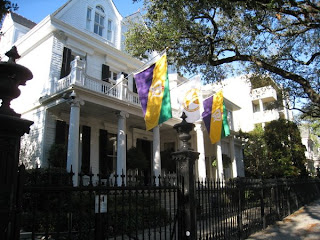 Posted by NOLA Cleophatra at 2:54 PM No comments:

I live in the congressional district that was represented by William "Dollar Bill" Jefferson - the congressman the FBI found $90K cash in his freezer. He got re-elected once since then, but this past fall he was finally voted out. While my district, and most of New Orleans, is full of Democrats, we elected Cao who is a Republican. Today's T-P has an article "Cao may be one of few to break Republican ranks on stimulus" (link)

Though hailed a party hero by Republican leaders in Congress after his upset defeat of Democratic incumbent William Jefferson, Cao would be a party renegade on the biggest vote since he arrived in Washington.

I voted for Cao as well as I voted against Jefferson and had Cao been up against someone other than Jefferson he might not have won. It's refreshing to hear a politician say:

"I'm voting along what my conscience dictates and the needs of the 2nd Congressional District dictate, even if I were to be the only member of the GOP to vote for the stimulus package, " he said.

It's good to see he also has a sense of humor:

Scalise, the assistant Republican whip, laughed when asked whether it was his responsibility to keep Cao in line, adding that a few Republican defections are to be expected.

But can someone explain to me what the heck "the hard-core, rock-ribbed Republican districts" means?

UPDATE
Cao voted no. It passed anyway but time will tell how it plays out. I like Adrastos' comment "Still, it would have been nice if Mr. Cao had tried but we got used to having an empty suit in the House during Dollar Bill's decline..." which is all too true. And I also like he "Kung Fu Fighting" video clip. "Those cats were fast as lightning." Sweet.
Posted by NOLA Cleophatra at 10:06 AM No comments:

Email ThisBlogThis!Share to TwitterShare to FacebookShare to Pinterest
Labels: Politics

There's been some action on this corner. The crappy Exxon that never reopened after Katrina has been on the market and the building is being torn down. 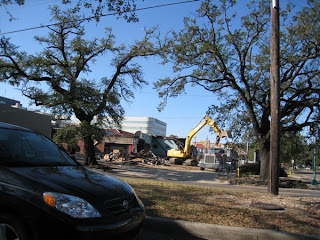 A year ago I did a post when the video store/deli was being torn down. The lot has been cleared and leveled but that's about it. 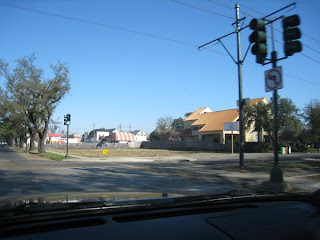 The Borders Bookstore opened recently after an extensive gut and build out in the former Bultman Funeral home. It looks nice from the outside, I haven't been inside yet. I'm torn between having a bookstore within walking distance that is a chain, (and serve Seattle's Best Coffee) or driving to Octavia books, a local bookseller. 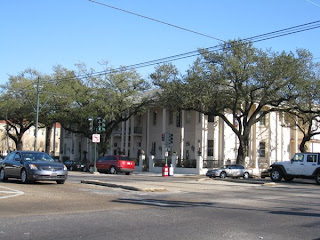 In just a few weeks parades will be rolling past here. The empty lot(s) could be prime party areas if they don't get fenced off.
Posted by NOLA Cleophatra at 5:05 PM 1 comment: