I went to my first Super Sunday yesterday. No, it’s not a sporting event. It’s a day when various Mardi Gras Indian tribes meet up, show off their suits, and parade. There is drumming, chanting and call and response. The suits are incredibly elaborate, covered in feathers, beading and rhinestones and can weigh over 100 pounds. It’s a generational thing and it’s great to see the kids out in suits as well.

Here’s an overview of the Mardi Gras Indians
http://en.wikipedia.org/wiki/Mardi_Gras_Indians

Click here for my photos from Super Sunday 2010.
Posted by NOLA Cleophatra at 11:47 AM 3 comments: 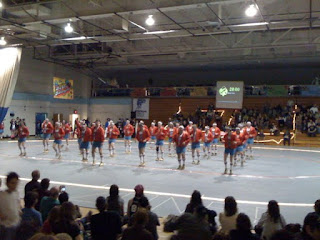 610 Stompers
The Saints have been Superbowl Champions for one month and about 14 hours, 16 minutes. The feel good after glow has not warn off. I heard "Halftime" (aka Get Crunk) for the first time since Mardi Gras at the Big Easy Roller Girls bout Saturday. I had grown sick of the song after hearing it over and over. The 610 Stompers were half time entertainment and did part of their routine to the song. The whole crowd on the New Orleans side jumped up and started singing and dancing along, myself included. My friends and I yelled ourselves hoarse. I hope the fans from Arkansas (the opposing team was the Arkansas Killbillies) were amused by our Stompers and the crowd's reaction.

CityBusiness reports on the "Saintsaintional Impact" the win has had on New Orleans. (Thanks to Humid Being for having the whole article.)

Of course now is the NFL draft and everyone is waiting to see who is staying with the Saints and who is going. A surprise was Scott Fujita signing with the Cleveland Browns. Going from the Superbowl winners to a team who went 5-11 last year. Wow. A surprise since Fujita always talks about how much he loves New Orleans. But of course, money talks louder. Maybe he hopes he can help the Cleveland become a turn around team/city, sort of like NOLA.

Some guy named Mike Polk made two videos, self proclaimed "hastily made Cleveland tourism videos." They are hilarious. I was going to embed them, but the maker's comments are priceless.