JazzFest starts this Friday! One of my favorite things about New Orleans. I am a little miffed that ticket prices went up again and the big name jazz artist are absent this year, I guess it's to make room for more big name pop/rock and even country stars. But all the local greats are represented, except for Aaron Neville who still has not come back since Katrina. Next week I'll be taking a friend from out of town on the tour of destruction and will probably have pictures to show. I'm trying to remember that last time I drove the tour... Was it really last July when these pictures were taken? I also want to try and find Fats Domino's house. You may remember he had to rescued by helicopter when his 9th ward house flooded after the federal levees broke. And speaking of levees, Levees.org is a local group formed to investigate the levee failures after Katrina. Now that the Corps of Engineers have claimed responsibility, and has said levees in 28 other states are also compromised, the organization is expanding their scope nation-wide. And to debunk another Katrina myth, a recent study shows that most of New Orleans IS above sea level.

But now for a really important news flash...New Orleans is back to 100% the number of restaurants Pre-Katrina! This doesn't include fast food or chains. Food is such a part of the local culture. And one of the local icons, Camellia Grill, finally reopened this week with people waiting in line to get in. Food critic Tom Fitzmorris writes about this and have been tracking restaurants as they reopen after the storm. The growing Latin American population inspired the T-P to feature restaurants that sell Central and South American cuisine, including the post-Katrina taco trucks, in this Spring's Dining Guide.

Which brings me back full circle to JazzFest... not only amazing music, also incredible food and art. To me it's heaven on earth.
Posted by NOLA Cleophatra at 9:25 PM No comments:

G and some of our civic-minded friends are forming a new group:

As the political season approaches, we invite friends, neighbors and colleagues to join our effort to create a new era of clean, responsive politics in New Orleans.

Come joins us for some light political conversation and a discussion of what can be. We welcome everyone from seasoned veterans to the newly engaged.

Please forward this information to others who may be interested in attending.

Posted by NOLA Cleophatra at 2:11 PM No comments:

So I'm going to just ramble. It's an overcast blah Sunday, which fits my mood. Not blue, just blah. Had things gone as planned, I wouldn't be posting today. I would instead be deep underground in Carlsbad Caverns. However, due to the really bad weather in and around Dallas Thursday and Friday, my flight was canceled. I was pretty bummed. I had been packed for a week, Dorie and I had talked a few times about details, I had made our trip mixed CD of tunes and I was busy all week trying to get things done before going. A very nice and funny American Airlines representative tried for 20 minutes to find me a flight, but the earliest she could get me to Albuquerque, on ANY airline not just AA, was Monday. I was supposed to return Tuesday. I could drive there faster. Plus Dorie only had Monday off. So my ticket was refunded and we'll have to reschedule. But staying in town allowed me to go to the Geek Dinner III. Greg got to know one of the NOLA bloggers through the neighborhood stuff we've been doing and loves to read the blogs. Today I've spent good bit of time reading the blogs of the people I met last night, since after one glass of wine too many I'm not fit for much else. It was a large group of very interesting people who sure know how to cook and it was a total blast. I haven't written much about the recovery lately. I was inspired by the people I was around last night to go back to the topic of recovery. Life is good in the sliver. Most blue tarps are gone either from roof repair or just disintegrated in the elements. We only have a few trailers and you know, it really is true if you see something everyday, you don't even noticed it anymore. It's only when I venture out to Mid-City or some other area of town that got flooded that you can't ignore the reality that there is still a long way to go. The second best way to know how things are here, after coming in person, is to read the blogs. New Orleans Wiki has a list of blogs on their site.

The other day I met a guy who is living in the house behind us. He's with Habitat for Humanity and he moved here from California. He hosts groups of students who come into town to gut houses and do other needed things on their spring break. Instead of going to Cancun or Key West, these people are coming to New Orleans to gut and clean houses. Yes, there are still houses that have not been touched since the storm. Things aren't back to normal and we still talk about IT at parties and such. But we want people to come down here. That's the only way to understand what happened, what is happening and why we (everyone who lives here) love this City so much and stay. We want to you to come, have a good time, help if you want, spend your money at our shops and restaurants, then go back home and tell everyone. I'm thinking of taking photos taken right after Katrina and photographing the same place now and put them up. Maybe someone's already started doing that? But it will get me out of the house and behind the camera. Though with all the festivals coming up, that project might have to wait.

If you do wander over to some of the NOLA blogs, you'll see the hot topic is the new trash cans and sanitation contract. I took a photo of our new can. You can see the normal size 40 gal can next to it-this will give you a sense of scale and what people are talking about. 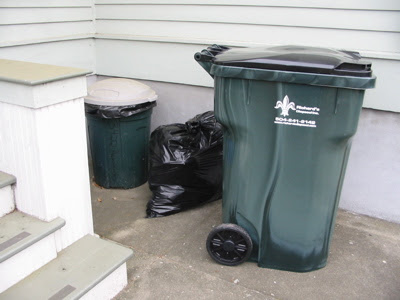 The T-P (newspaper) made light of the controversy today, April Fool's day, with staff artist's ideas for decoration the cans (I can't find the photos on their site though) and a Brief History of over sized trash cans. Which reminds me, I need to go scoop the cat boxes, oh joy!
Posted by NOLA Cleophatra at 3:40 PM No comments: