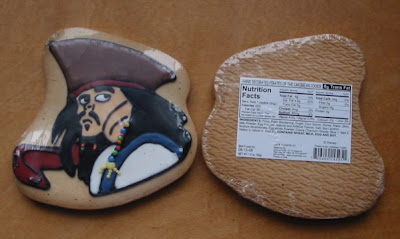 Do you know what this is?

It's an official Disney©TM® Pirates of the Caribbean cookie featuring the likeness of Capt Jack Sparrow... who is...

People who know me know I love Johnny Depp. My husband even knows this and accepts this fact. So imagine my shock to see, walking in to my neighborhood A&P grocery store to see these cookies. Has Johnny sold out? Did he know Disney was going to pimp his likeness out? The cookies were made in China so I suspect they were decorated by hand - the one turned over, his eyes are all cattywhompus. I mean, he's already on cereal boxes and fruit roll ups. Cookies? Got to love the candy "beads" in his "hair". But what is the red thing on the left? Am I the only one who find this bizarre? 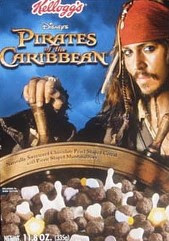 Posted by NOLA Cleophatra at 2:45 PM No comments:

I've started a new garden blog. Check it out here: http://deepsouthgarden.blogspot.com/
Posted by NOLA Cleophatra at 11:21 AM No comments: 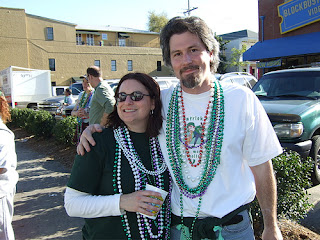 Saturday, we held our first St. Patrick’s Day party, which was a blast. We live next to the Irish Channel neighborhood and every year there is a parade, as well as parades in other parts of the city. It’s like Mardi Gras lite – almost all local, no elaborate costumes but lots of green clothing, lots of drinking, hanging out and good fun. 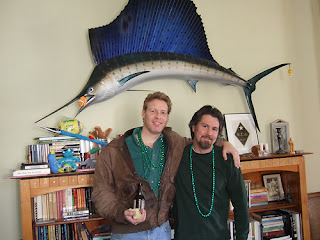 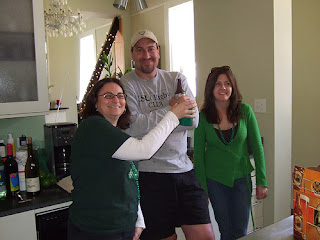 Along with the usual parade fare--beads, cups and toys-- cabbages, potatoes, onions and carrots are also thrown. I put corned beef on to cook that morning. After the parade, I threw in the veggies we caught and had a very yummy “Irish Boiled Dinner” (the secret is beer!) Typical parade day, the group of people we started out with, wasn’t the same one we were with at the end of the day. 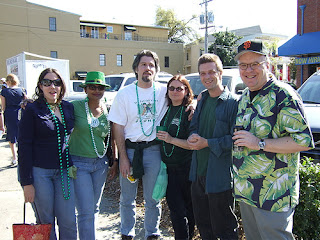 In addition to St. Patty’s day, spring has sprung and everything is growing. And the oak trees are dropping their neon green pollen everywhere. ACHOO! I started my veggie garden early this year. Last month I planted lettuce, spinich, parsley and cilatro, which is now coming up. Planted a few tomato plants this weekend-hmm guess I forgot to take a picture of that. Saving room for cucumber and peppers. We put down plastic to keep weeds at bay. One gardener had a roll of FEMA blue roof that we used to cover the empty plots. 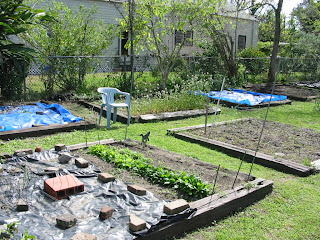 Posted by NOLA Cleophatra at 6:24 PM No comments: