G and walked the Lafitte Corridor today. It was a lovely though hot day and there was a good turn out. We almost missed it; we were pulling up to Armstrong Park, the meeting place, at 10:01 and the group had already taken off! We drove up to the front of the group and found a parking spot and joined in. A couple of other bloggers were there: Dangerblond, Tugboat Captain, Celcus and Michael Homan. And of course Editor B was leading the show. He runs a tight ship and has a quick stride. I almost got left behind a few times because I stopped to take pictures. I finally set up a Flickr account and you can see more photos there. link 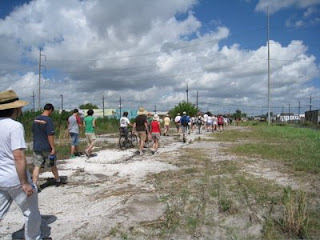 We passed the abandoned Winn-Dixie that prompted a discussion about the lack of grocery stores in this area of town. Past the Lafitte housing complex – half still standing, half gone. Inside some of the units there were still people’s possessions inside. There was that terrible post-federal flood stench of moldy, rotting stuff. We passed the traffic light graveyard, warehouses, the shuttered Mercy hospital, Bayou St. John. Stopped at the new Massey’s on S. Carrollton for blessed AC and free lunch! 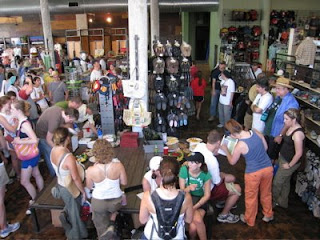 After lunch, we pushed on along the still existing rails passing Delgado, Holt Cemetery (in bad need of a mow) and ending up at Canal Blvd. We made quick time and had 30 minutes to kill before the arrival of the bus Massey’s got to take us back to our cars. Some of us wandered over to the Bulldog for a pint. The last time I was there was after Ashley’s funeral.

The walk was gritty and urban, and not very pretty. It would be fantastic for it to be redeveloped as a greenway with a path and be a link from the Quarter to Mid-City. The hope is for next year’s walk, part of it will be a trail. The Friends of Lafitte Corridor’s web site says they need to only raise $3,422 more. The state will match every dollar with $4! If you support this effort, go and donate to help make this happen. And if you live in City Council Districts A, B or C, let your representative know you support it.
Posted by NOLA Cleophatra at 4:11 PM